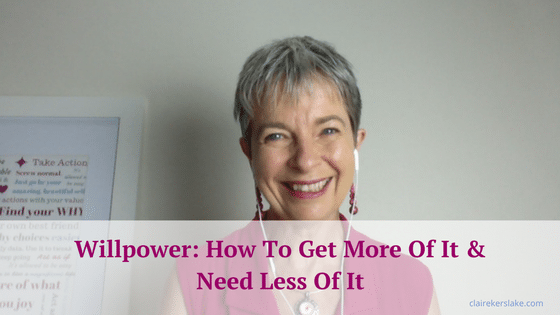 If only I had more willpower.

This is a common statement from many of my beautiful clients and I’ve thought it myself on more than a few occasions!

Anything that puts a stress on the mind or body will affect this part of the brain and reduce your willpower.

Being sleep deprived, affected by alcohol, sick, or in chronic pain all cause our willpower to become conspicuous by its absence.

Let’s look at what we can do to reduce our reliance on willpower in making the right decisions for our health.

Develop an awareness of when you give in to impulses

Instead of beating yourself up for your distinct lack of willpower, become more aware of what’s  contributed to the situation.

Were you stressed or tired? What were you feeling at the time?

What were you thinking?

Once you have a clearer picture of the situation, you can then build some solutions into your plan.

As an example of what this might look like, as a recovering workaholic, I used to frequently skimp on sleep trying to get ‘one more thing’ off my endless to do list.

Grabbing a Coke to help me power through became a common occurrence.

With awareness, these days I’m much more likely to heed the signs that I need to sleep and head to bed instead. Or take a quick nap to recharge if I’ve hit an afternoon slump.

Willpower is depleted through the day

Willpower acts a bit like a muscle. You can build it up (which we’ll talk about shortly), but it gets depleted with use.

Incredibly, we make somewhere between 100 & 200 food related decisions a day!

Which is why supermarkets have lollies at the checkout.

They sell more lollies and sweets by displaying them there because we’ve exhausted our willpower with the millions of decisions we make as we shop.

We get decision fatigue.

Strategically placing products in this way CAN be used to boost our health, but unfortunately you don’t often see it. Studies show that supermarkets will sell more health related products such as fruit, dental floss and condoms when they have them at the checkout.

How do we make this work for us?

If you find yourself succumbing to the lollies at the checkout, make use of the confectionary free aisles if your supermarket has them.

We can prevent or minimise willpower depletion by reducing the number of decisions we make through the day.

By structuring our environment so that we automatically make better decisions without having to think about it, we save that precious willpower for when we really need it.

Research by Brian Wansink and his team reveals that simply by swapping to a smaller plate we’ll reduce our portion size by an amazing 20 to 30%.

Similarly, keeping those unhealthy snacks out of the house if possible or if not, at least out of sight and preferably somewhere super inconvenient can really make a difference.

This also works in reverse. Placing a fruit bowl in full view on the counter increases the likelihood that it’ll actually get eaten. In one study, the average time fruit lasted in a fruit bowl was 8 days while fruit stored in the fridge lasted a whopping seventeen days!

Taking your lunch to work instead of buying it can also be an effective willpower saving strategy.

You’re not trying to make a decision when you’re stressed, in a willpower depleted state and surrounded by delicacies in the cafe with your name on them!

And as an extra bonus, you save money too!

Bright lines are simply rules that you set yourself.

In reality they make life so much easier. Gone is the ‘Will I, won’t I’ dance that all too often leads to giving in to temptation and guilt and recriminations later.

In my life I’ve set some bright lines around alcohol that I find really helpful.

There is real freedom in making these decisions ahead of time.

Have a think about where bright lines might come in handy in your life.

Maybe it’s a bright line around buying chocolate from the supermarket.

Imagine being free of those guilty excursions up the chocolate aisle and the feeling of regret later.

Or you might set yourself a rule that you don’t eat while watching television (in another study, participants ate 28% more popcorn when watching for an hour than those who watched for half an hour).

Even if you’re a bit of a rebel and a rule-breaker like me, give this strategy a go. You just might be surprised at how effective it really is!

Distance yourself from temptation

I talked about this in my article on cravings.

When we’re tempted, all of our good intentions suddenly don’t seem quite so important.

We’re consumed by the object of our desire.

We need to cool those flames and rekindle our motivation instead.

One way to distance ourselves is to put some time and space between us and the object of temptation.

We can do this physically by putting the chocolate out of sight, for instance, or turning our back on a buffet, or simply by distracting ourselves for ten minutes.

Rekindle your motivation by getting back in touch with your why. Your reason for being healthy.

By making your motivation really vivid and bright and the object of your desire small and distant, you’re redressing the balance and making it far more likely that your actions will align with your good intentions.

Ask yourself ‘What is it I really need?’

As I discussed in my post on cravings, regularly asking yourself the question ‘What is it I really need?’ will really serve you.

Instead of what you believe you desperately need in that moment, you’re likely to find it being something that nurtures your soul instead.

It could be as simple as some me time with a beautiful cup of tea and your favourite magazine.

It can be really helpful to have a go-to list of nurturing activities ready so when those moments hit and you desperately need SOMETHING but you don’t know what, you can try something beautiful off your list.

Now that we’ve talked about how to need less willpower, how do we INCREASE our willpower?

Apparently Americans get around 2 hours less sleep than in 1960.

And in the same time waistlines have expanded. Some researchers believe this isn’t a coincidence.

It makes sense when we remember how being sleep deprived  reduces our willpower.

Take a closer look at your sleep habits and whether there is room to improve in this area.

You absolutely CAN sleep your way to better health!

The willpower boosting effects of meditation are yet another great reason to try it if you haven’t already.

Regular meditators have more grey matter in the areas of their brain that deal with willpower and in one study researchers found that just three hours of meditation led to improvements in willpower.

Meditation also reduces stress, boosts the immune system and a cascade of other positive effects in the body so there’s never been a better time to give it a try!

Decluttering seems to be the current buzzword and for whatever reason, having less clutter around us seems to have a positive effect on willpower.

And you never know, sometimes decluttering also leads to other unexpected advantages. If you’ve ever found a gift voucher a month after it’s expired, you know what I mean!

No, you don’t have to dress in green while raising a sweat! Green exercise is simply exercise that you do outdoors in nature.

Just 5 mins of green exercise decreases stress, improves mood, boosts self control, so you don’t have to do a ton of exercise to get positive effects.

Another great reason to move our bodies!

Practice using self control on the little things

Similar to building up our muscle mass through resistance training, we can increase our willpower by practicing on minor habits such as improving our posture or changing speech patterns.

In real life this might look like noticing every time you cross your legs and uncrossing them or noticing speech patterns such as umms and aahs and making changes there.

Use EFT (or tapping)

I’ve saved the best for last! Tapping is simply amazing for dissolving those cravings and reducing the compulsion we sometimes feel for certain foods. And where willpower can seem to vanish just when we need it, tapping is super effective in just a few minutes.

It’s absolutely perfect for those times when the chocolate in Aisle 3 is calling your name!

So there you have it – a whole range of strategies to build up your willpower muscle, minimise willpower depletion as well as an amazing tool that in many instances replaces the need to even use willpower!

If you’d like to find out more about tapping, check out the video below:

For further reading and more information on the studies mentioned in this post, check out the following resources:

24 Responses to Willpower: How To Get More Of It And Need Less Of It